Do you have a question about choosing a radio, installing an antenna, or are you simply trying to figure out how to find that elusive station on the dial? This is a place where you can ask your question and seek guidance from a wide variety of radio enthusiasts. No questions are too simple. You will be treated with respect here.
Post Reply
38 posts

That looks great! Thanks for the hard work.

I presume the coax to the antenna counts as the vertical part of the T?

The antenna is made using three wires, two wires forming the horizontal "arms" at the top and a wire forming the vertical portion of the antenna and dropping down from the horizontal wires junction to (near) ground, at that point, you'll either install a ground stake or a number of on ground radial wires (same length as the horizontal ones at top, number between two and whatever you can afford); between the vertical wire and the ground stake (or radials) you connect your BalUn and from there you start the coax going to the station; to be more clear, here's how the antenna is made (no masterpiece of art 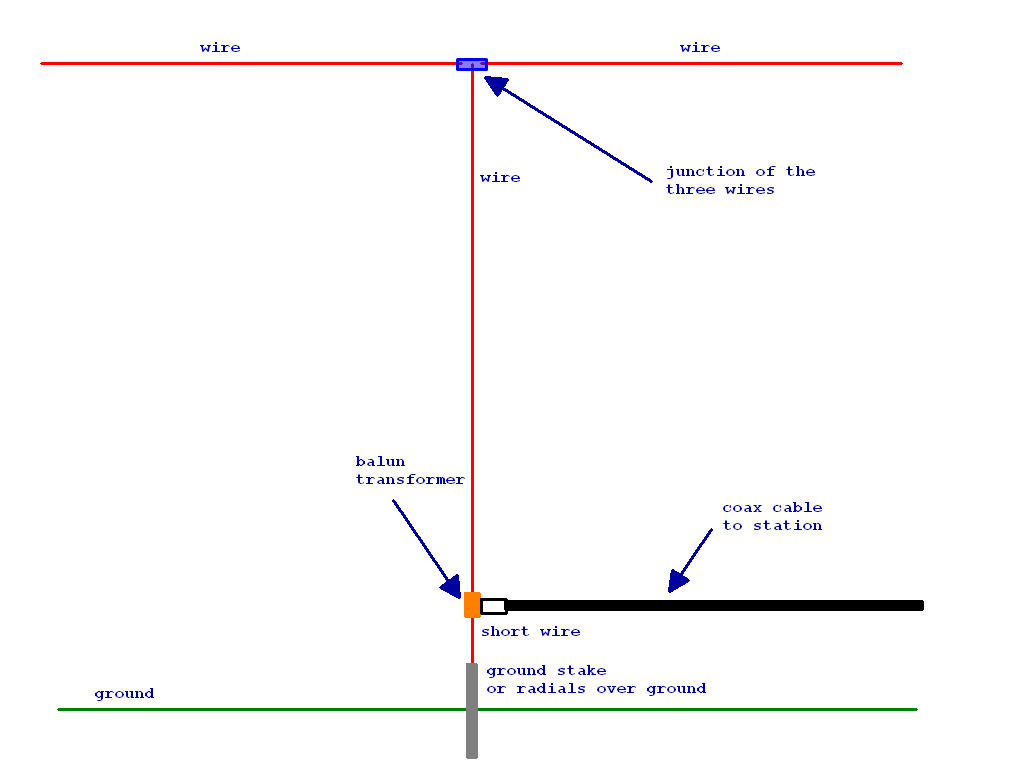 the horizontal wires and the vertical one are connected together at top to form a "T", at bottom of the vertical wire you connect your balun, one side to the vertical antenna wire, another side to the ground stake or, if you can use radials, to the radials (don't use both, either the stake or the radials), the radials, if used will be laid on ground and should be more or less symmetrical, at minimum use two radials aimed as the top horizontal section, otherwise just hammer down a stake in ground and connect it; the difference will be in terms of gain, it will be somewhat higher if using radials, lower if using the stake

hope it's clear now, if not just ask !
Top

Okay, but since this a receive-only antenna, do I care about the radiation angle?
Top

Okay, but since this a receive-only antenna, do I care about the radiation angle?

This is actually a good question! I usually try to avoid the term "radiation angle" in context with reception and SWLing because it feels "wrong" -- receiving antennas don't "radiate" but the lobe shape and elevation angle does the same for transmit and receive of course.

Maybe you know that, if you're into some business for a long time you tend to think that everyone knows about e.g. the old "antenna reciprocity" theorem, which is the reason why we can use that term also for receive-only antennas - it says that antennas generally have the same properties for transmit and receive*. I get thrilled when I see flat vertical "radiation" pattern plots for an antenna because that's what really helps making a receiving antenna sensitive for particularly distant signals and it didn't come to me that these plots may not be self-explanatory to everyone, particularly when they're missing that one deciding little "reciprocity" tidbit of knowledge. I wonder how many people may think some random wire is as good as it gets for them because the term "radiation" became downright misleading, or who are just not aware how much impact the elevation angle of an antenna can have on reception. To me, this might be something to consider when I'm rambling on about antennas.

Here's an example basically showing the difference between 2 somewhat similar antennas, one with a high and the other with a pretty low elevation angle, on reception of a very distant station (New Zealand is more or less the antipodal point of my German listening post):


* This theorem is valid for antennas that can actually be used for transmitting. To make things more confusing receive-only antennas often break that "reciprocity rule" to make specialized antenna forms possible, they sacrifice the properties needed to make them good transmitting antennas in order to improve their reception properties.
Top

This forum is a great place to learn stuff, and -- thanks to my Scottish thrift genes -- I'm an enthusiast of low-cost experimentation.
Top

This forum is a great place to learn stuff, and -- thanks to my Scottish thrift genes -- I'm an enthusiast of low-cost experimentation.

now, the antenna radiation (and reception) pattern is omnidirectional, so imagine it as a "donut" and the graphs shows the donut as if it was vertically sliced in two and observed from a side; the red line shows the highest gain angle, while the green lines show the -3dB ones (still very usable), if you carefully look at the graphs, you'll see that the bottom green lines are low enough (on the horizon, if we think to a real antenna) to allow picking up distant signals, at the same time, the higher green lines are pretty good for mid/short distance reception; that's it, nothing requiring rocket science

The above being said, if you don't already have it, I suggest you to fetch this book and give it a check

here's another idea for you, Jock 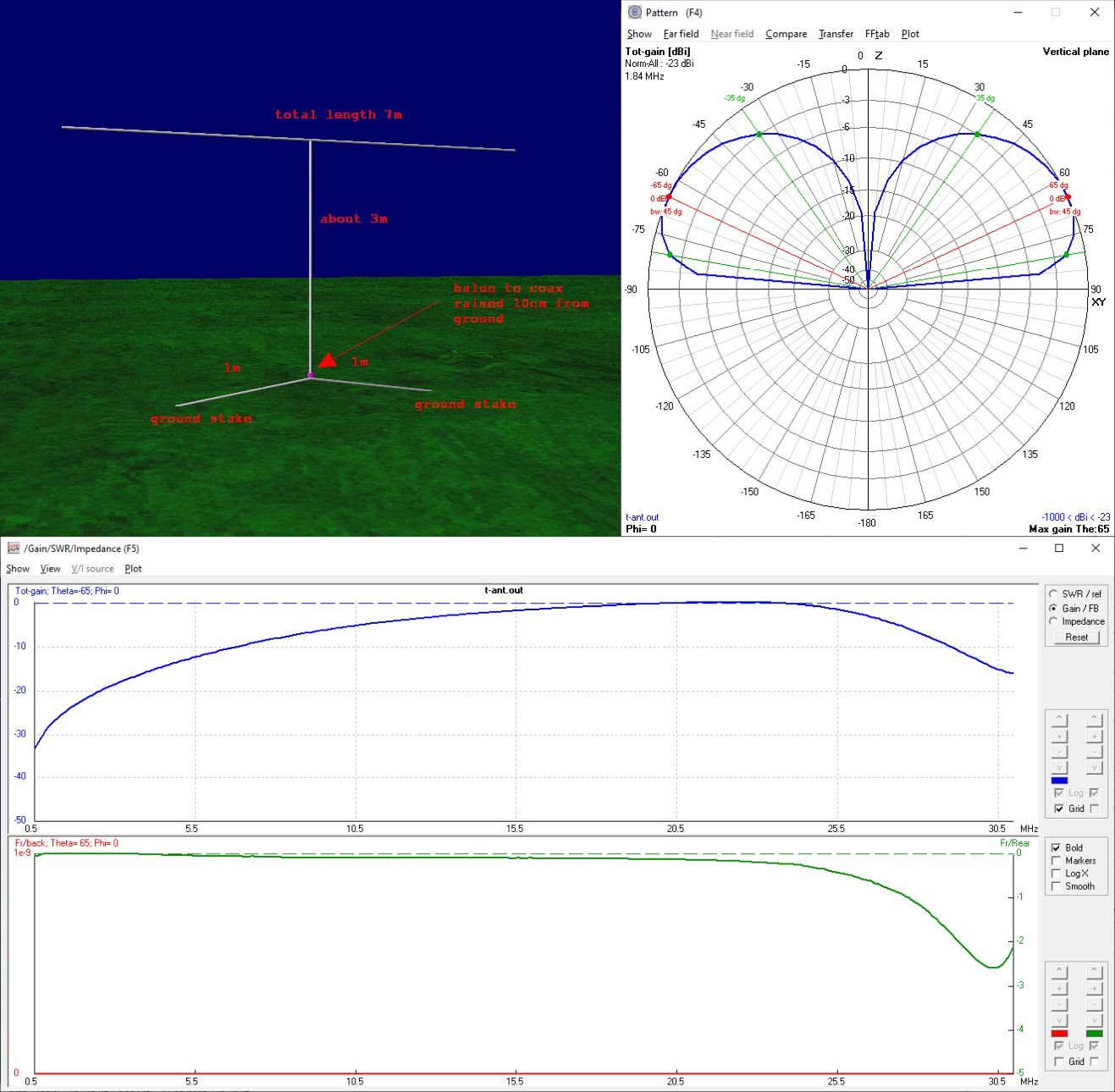 the structure is similar to the one we've already seen, but instead of using a short wire connected to a stake at bottom, we use two 1m wires whose ends are connected to a pair of stakes, with the feedpoint raised about 10cm from ground; the result is a bit more gain as shown in the graph, gain which, using a 10...20dB preamp, may be brought up as desired
Top
Post Reply
38 posts