Use this forum to discuss any radio-related topic outside of asking for advice (check out our Questions and Advice forum for those topics). As with all of our forums, treat others with kindness and respect.
Post Reply
38 posts

In my humble opinion, it's the Japan Radio NRD-515. Functional, utilitarian, without looking cheap.


JRC rigs are, in my very humble opinion, the best engineered ones, just to say, a lot of them were built usin a modular approach, with "plug in" boatds, which eases manteinance/repair; then I also like the Yaesu FRG7 (another category, but operating a Wadley loop is something worth trying

), plus the "frog" is relatively simple and replacing the battery lid on the back with a homemade one, allows to add connectors w/o modifying the receiver (and then the mods could be easily rolled back)
Top

Drake R-7, the epitome of 70s US design, elegant, functional plus bling

If you had to recommend a vintage/legacy/classic tabletop for both performance and "maintainability," what would it be?

I ask because I saw some threads on a Drake R8 forum where folks were having to do some engineering to get new parts to work, since the old (in need of replacement) parts were unavailable.

Or would one simply be better off with a modern piece of gear?

Also, does anyone know how to get PMs to work on this forum?

The only vintage thing I'd personally like to put on the table (if that would make any sense in a RFI-infested neighborhood that is) would be the R7A (which is very different from an R8) for its looks and features and the raw but phase noise limited performance and I'd simply ignore how good or bad the maintainability is (AFAIK it's not that bad). C'mon, it really has it all - a preselector, a gentle pseudo-sync detector (with its own cool name "Synchro-Phase"), an optional filter board, digital readout and a cool analog dial...

The only other radios with a lot of coolness factor and high performance coming into my mind are Collins 75S-1 or R-390, they don't suffer from a noisy PLL but they lack any modern features of course.

Other than that I don't have the space for becoming a radio museum and I already had a dead FRG-7700 that could've been resurrected only by cannibalizing the same odd PLL chip from an R-600, there are probably as much radios suffering from parts resupply issues as there are radios that don't... but I'm generally a sucker for performance and wouldn't consider any of those anymore. It might be different if I were a "program listener", then I'd probably go for the looks and I'd want a sync detector and that would put the R7 on the table again, but also the NRD-525/535/545 with their somewhat bland (to me) 80s design.
Top

13dka, you're right; that Drake R7A is gorgeous!

Thanks for the info.

Regarding the title of this thread only, I've always thought the Hallicrafters SX-28 was gorgeous: 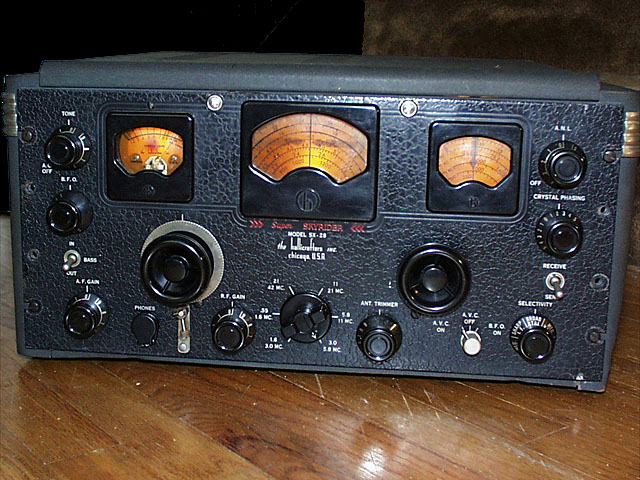 I've also thought the Panasonic RF-4900/DR49 had a certain get 'er done appeal:

KnoxvilleMike wrote: ↑Tue May 31, 2022 3:51 pm Regarding the title of this thread only, I've always thought the Hallicrafters SX-28 was gorgeous:

I think that, given its weight it qualifies as a "tabletop", doesn't it

Uh, no. Those are rather hideous, in my opinion, especially those in the first link with that nasty green paint!
Top

I can't decide whether the B-40 looks positively agricultural or it's something that came out of a Russian missile silo.

It looks like it is designed to survive a "significant event."