Use this forum to discuss any radio-related topic outside of asking for advice (check out our Questions and Advice forum for those topics). As with all of our forums, treat others with kindness and respect.
Post Reply
16 posts

Why is nobody making BNC antenna switches anymore?

Don't we all know this: Trying to keep things simple and the number of adapters and special patch cables in check is really hard: Some radios have PL antenna jacks, some BNC and some SMA, and whatever peripheral you want to buy it tends to have the opposite connector type than the rest of your gear. Each adapter adds their own little losses and particularly cheap ones are a fine source for corrosion headaches, adapter cables with a matching connector at each end always have the wrong length so almost futile attempts are made to buy stuff that has the correct connectors in first place so you can make due with one drawer full of coax pieces.

Getting everything in PL is easy but BNC and now SMA sure play a role in the SWL shack, and getting stuff in either BNC or SMA is a little harder. Antenna switches with BNC connectors are as rare as dodos: In regular intervals, I rummaged Google for such a switch and found nothing but other people with the same desire (and odd answers to it). Apparently, Daiwa made a 4-position switch with BNC (CS-4) ages ago but of course it's long out of stock and so it looked like converting some switch myself was the only option besides giving in and buying more Chinese PL-BNC adapters.

Then, one day I found an odd looking offer on the website of some German "Bundeswehr" surplus materials dealer: It was allegedly an antenna switch, it had BNC and so I ordered it (gnashing my teeth) for 50 Eurobucksit without much expectations, it looked tiny and a bit like something homebrew. When I picked up the parcel at the post office I wondered what they had sent instead of that little switch - the box was way too heavy! 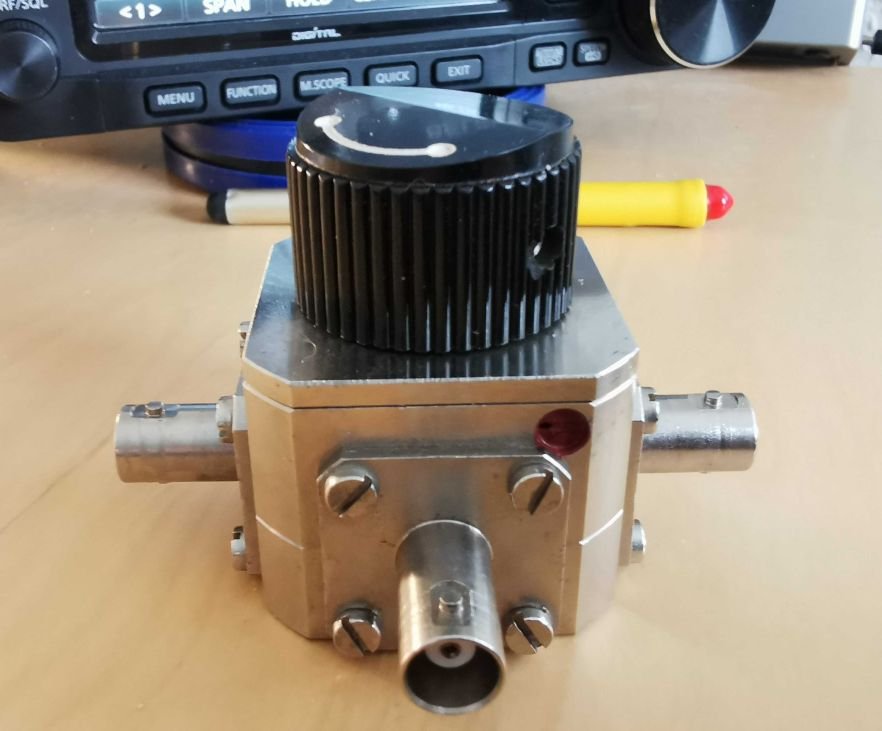 The Box actually contained an antenna switch and two short BNC patch cables with their own military manufacturing code. And what a switch it is! Despite the small size it weighs almost as much as my IC-705, it's apparently made of 316L marine grade stainless steel or something and I didn't know what kind of switch there is inside, but it sure feels incredibly heavy, precise and smooth. Well, the German army sure doesn't have a reputation of ordering garbage...or wait...actually they sometimes do, but they sure didn't order sub-par antenna switches.

After making sure the switch doesn't have some odd internal wiring I connected it and by that time I was already so delighted by the heavy quality that I had to google the manufacturer and learned that "hofi Hochfrequenztechnik GmbH & Co. KG" in Bavaria is also the distributor of Versatower lattice masts and Fritzel antennas and that they still make antenna switches, which are all a bit on the expensive side of things.

After some more research I found out that this switch looks like a variation/conversion of a hofi "4000 series" switch and when I found one expired offer (they are currently unavailable) for this type of switch (with N-connectors) my jaw dropped onto my keyboard: They are (justifiably) advertised as "high-end" switches and the price is whopping 460€ ($530)! 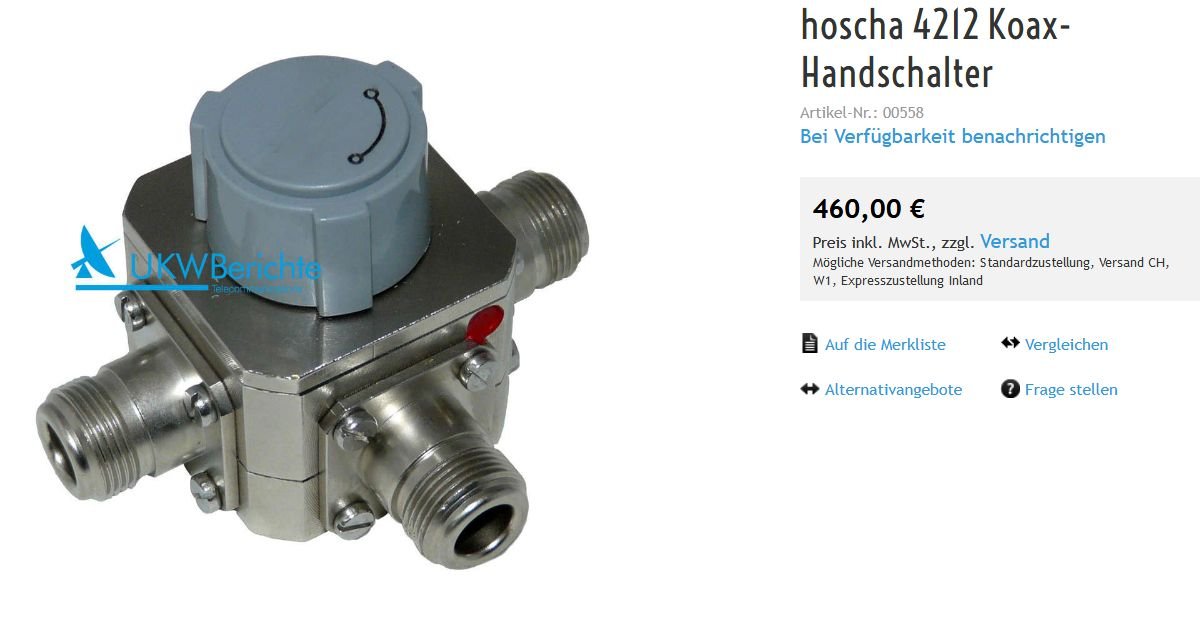 
This is reflected in some excellent specs. My BNC version is certainly not rated for 1.5 kW at 30 MHz like the version pictured above but I guess it'll work all the way up to 2.5 GHz with a specified SWR of 1.1@2.5GHz, low insertion loss and excellent isolation figures. The switch inside is running in ball bearings with dual contacts and spring loaded detents and it's likely a more-than-one-lifetime investment. Not that I cared at that time but I've had a few cheap antenna switches and they tended to become noisy after a while, and the isolation between the inputs often lacked a bit. The isolation of this switch was tested at the dike using the massive 9+60 RRI signals on 41 and 31m - not even a trace of a signal with the actuator in the middle between the two switch positions, so just nothing at all on the position for the open input. If I turn the switch towards the connected antenna I get some heavily attenuated signal shortly before the contacts meet, since it remains in that position on its own before it clicks into its end position, it can be used as 60+dB variable attenuator.

So a lucky find, quite a bit of my tax money purchased back for small money1

Edit: That works, and it probably shouldn't for a new user with less than n posts.
Top

Hi there, here I am, onboard

So the reply with a link is being allowed because you're already a moderator, so I think it bypassed that rule.
Top

And that antenna switch? That thing is INSANE! What a find indeed.

I may re-post this as an article on the SWLing Post. I'd love to learn if there are other BNC switch alternatives out there.

Thomas wrote: ↑Sat May 28, 2022 10:23 am I may re-post this as an article on the SWLing Post. I'd love to learn if there are other BNC switch alternatives out there.

Sure! My prediction would be that this doesn't bring up anything new tho, I really searched high and low, east and west and all I found was either discontinued stuff or old Ethernet 75 Ohms switch boxes (which are probably just as hard to come by).

I may re-post this as an article on the SWLing Post. I'd love to learn if there are other BNC switch alternatives out there.

Hi Thomas, sounds like both SWLing and QRPer got their forums, I just wonder if it would have been a better idea using a single forum with two main subsections, but then this approach is fine too

As for that switch, it's quite outstanding, although given the reported weight, I'm not sure it would suit a SOTA or POTA activation

P.S. used my alternate email to subscribe, hope it isn't a problem
Top

A note. Thomas, what about some section dedicated to the SWLing post blog ? I mean, a section with automated posts and links to new blogposts, it will act both as a reminder and to allow people to further discuss the topics
Top

I wanted to greet all the Friends of the forum ...
I publish this first for testing ...
a greeting from Italy to all of you.
Giuseppe Morlè.
Top
Post Reply
16 posts