Use this forum to share your logs, your DX, and any broadcasts or signals of interest. If you're trying to identify something you've heard on shortwave, this is a great place to start!
Post Reply
6 posts • Page 1 of 1

Friday afternoon (November 4th) around 14:20 UTC (15:20 local) I was scanning the MW band with my indoor YouLoop, when I heard an unusual Russian speaking station on an unusual frequency of 1521 kHz getting stronger and stronger. MWList.org had nothing Russian in the Europe/Africa/Middle East list for that frequency... that was because the station wasn't in that part of the world: It was "Radio Kitaya" a Russian program from CRI transmitted from Hutubi in northwestern China with a whopping 500kW:

However, it was still broad daylight and that station is just as whopping 5,445km or 3,383 miles from here, that's roughly the distance between Anchorage, AK and New York City, and the signal was unusually strong even for that kind of power (10dB less = 50kW would've been no problem). The band was otherwise still very much in daytime mode, like 2 hours before sunset! 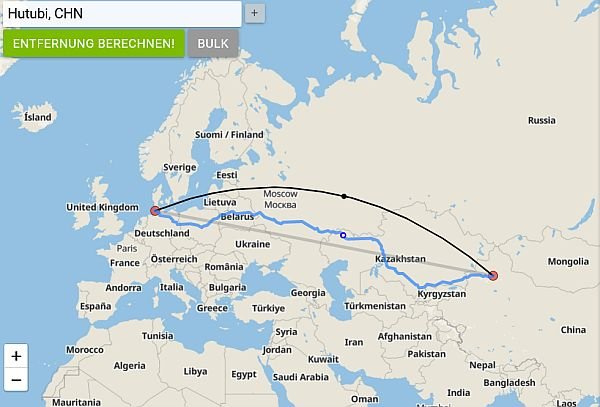 
Of course I scanned the band more while it lasted and heard a few more Chinese language stations, one of them was taking out BBC Aberdeen on 1449 kHz. The spectacle lasted for maybe 30 minutes with fading intervals of ~5 minutes, then the stations disappeared again (and Radio Kitaya flared up once again hours later after sunset). When I conversed about it with Thomas later that evening I remembered that I forgot looking up where the 2 possible Chinese 10kW transmitters on 1449 kHz are located and found out that both are in eastern China, one 7,425km/4,613mi away and the other 7,820km/4,860mi and I Instantly regretted not having recorded that one... what the Heaviside?

My basic theory is that the signal was refracted on the dark side of the grayline and slipped underneath the likely still heavily charged D-layer (HSS influence) to its destination, my indoor YouLoop.* 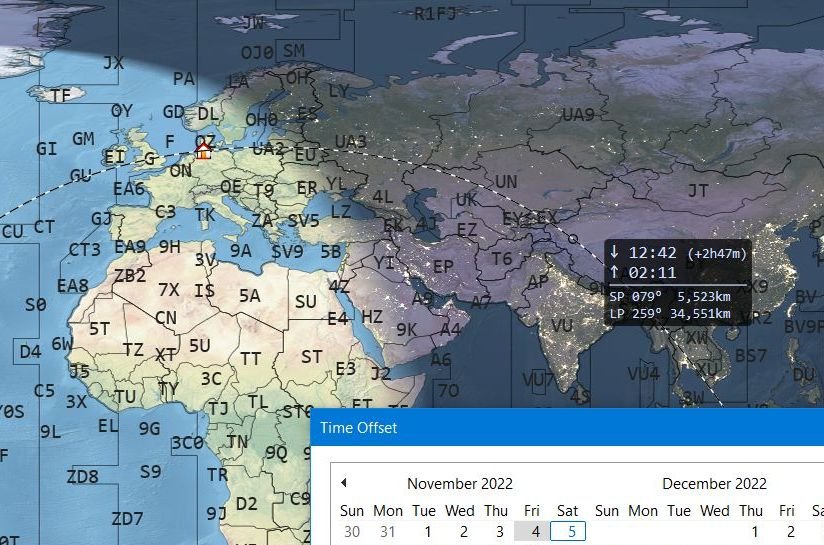 
That doesn't explain the signal strength from that kind of distance and how that short and (at least to me) pretty out of the ordinary flare-up was over so quickly? I checked the realtime solar data off the NOAA page and noticed the event coincided at most with changes in the interplanetary magnetic field strength components Bz/By/Bx and Phi (angle) of the field. Other parameters I could find (without knowing what I'm even looking for) did not give away any indication of how space weather could've had a word in this. 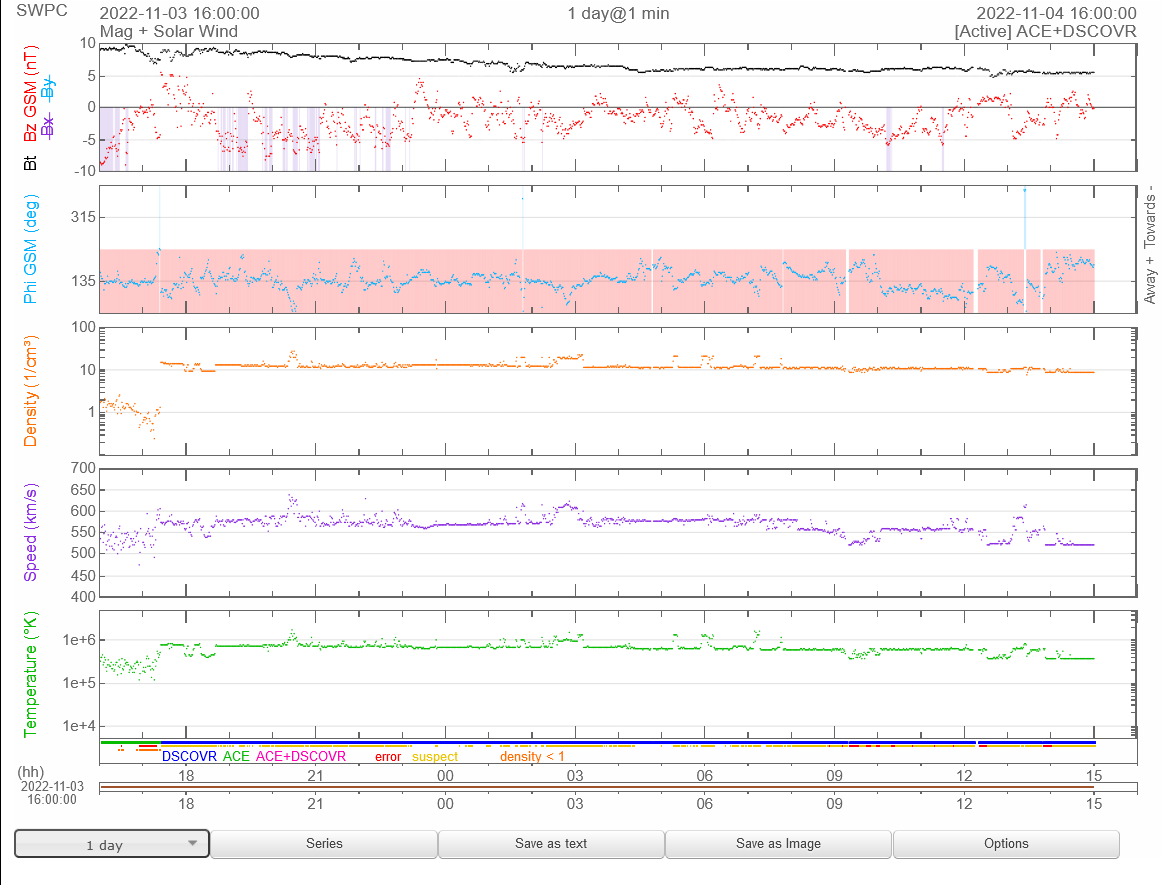 
Whatever it was, it was unexpected and reminded me how little I understand the role of space weather in MW DX. However, another part of my ad-hoc theory is that this was a rare (?) occurrence of an extended (more than 4,000km) one-hop propagation path. I think this could only work this good for eastbound paths because the refraction would happen in a still nicely charged F2-layer since the sun went away only a short time before. For westbound paths, the refraction point would be either in the F-layer of the dark side already having lost much of its ionization over night, or a freshly charged F-layer on the day side but then the D-layer would be in the way, particularly with conditions like this (high A-index).

Apparently, even the old MW is always good for a surprise! Has anyone ever witnessed something like this?
Top

I monitored that frequency in the past days a little more:

- Saturday: Conditions were more or less the same as on Friday (high A-index) and I heard R. Kitaya just like on Friday. The station faded in around the same time for half an hour, then disappeared again until 19:00, 4 hours later, just to fade out again (likely) for the rest of the night. Here's a video:

- Sunday: Turned on the radio a bit late, 15:00UTC no Radio Kitaya to be heard, but I heard it 4 hours later again.

- Monday: A-index was back to normal again (SFI=131, A=4, K=3) and I could hear only a very faint signal of what could've been Radio Kitaya after 14:30 UTC, too faint to verify. But around 14:15 I heard faint music I deem typical for India, but no verification was possible due to offline webstreams.

The preliminary theory is that the accelerated solar wind causing the shortwave R1/R2 blackouts on the weekend enhanced the grayline on the MW band. What else would could've caused this massive (for the distance and indoor reception on an extremely lossy YouLoop) signal? Gigantic alien mothership floating over Moscow?

Tuesday: SFI = 135 A = 19 K = 3 again and that's about the best I could off that frequency (not even something to hear on that faint little residue carrier): 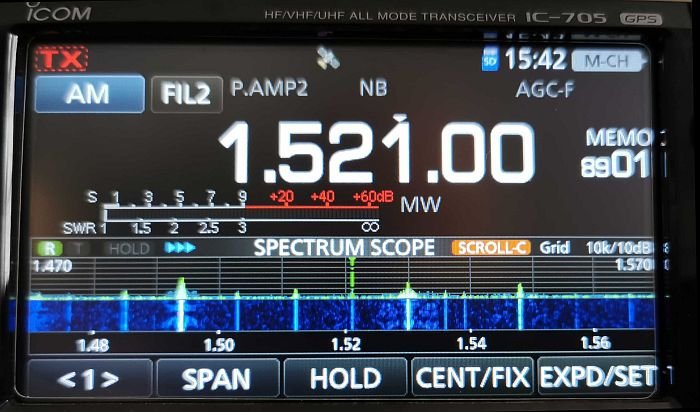 
Well, this doesn't look good for my theory, or it's more complicated than only "HSS influence = MW amusement park". Maybe it had to do with this?

Edit #2:
Wednesday: R. Kitaya is back with S5 in heavy, minute-long fading - the solar storm mentioned in the article linked to above happened a day before the station boomed in so heavily on Friday, maybe there's just a delay of 24 hours. Frequency is turned off 14:57 UTC, which of course explains its disappearance for the next hours. I'm not sure if I could stand schmaltzy Chinese pop ballads any longer anyway.

Wednesday night a quite strong, uncharted station popped up on 1593 kHz around 1930z and played some cool EDM tunes, getting stronger and stronger until 1959, then transmitting a 1kHz test tone. Then they (must've been them) switched to 1053 kHz and completely took out the signal top dog TalkSport over here with that test tone for 3 minutes, then seemingly reducing power in a few steps. The precise times, the booming signal and the test tones seem to indicate that this was not just your average random pirate. Good old medium wave, apparently full of strange things if you care to dwell there for a while.

Thursday: Same or even a little better than Wednesday. SFI = 138, A = 7, K = 0. Assisted by a KiwiSDR in Finland I learned that at 14:57 they don't turn off the transmitter, they switch antennas to a different target area.

Saturday: 1521 kHz faded in identifiable around 13:20z already and peaked shortly before the antenna switch again. Condx on shortwave were good. Apparently the appearance of this station in the afternoon isn't something out of the ordinary at all, just a lucky geographical constellation. I think I'll leave it at that, after all I start seeing region 2 carriers indoors again and I'm curious what that will bring this year.
Top

That's a pretty amazing catch - and good job with the SIGINT getting it identified!

still here, despite life; may have something for you in a while (almost no time, lately); try the SULA to check signals directions, that could probably give you a better idea
Top

I'm curious with what you came up with again! Re the SULA, unfortunately it's not very good in my den as I recently confirmed again when I wanted to test something indoors, for the simple reason that it's fairly susceptible for electrical noise. BTW this week I received a bag (sigh) of SPDT on-off-on switches so I can build a new SULA with the 2 alternative (omni flat and omni NVIS).

Not sure what you mean but the YouLoop's orientation was consistent with the heading shown in Simon's World Map.
Top
Post Reply
6 posts • Page 1 of 1