Use this forum to discuss any radio-related topic outside of asking for advice (check out our Questions and Advice forum for those topics). As with all of our forums, treat others with kindness and respect.
Post Reply
19 posts

Maybe it's good for Alex (EU1ME, the maker of the Belka) that his radio is not all that easy to obtain and also not that easy to comprehend what it really is -- otherwise he'd probably be so swamped with orders that potential buyers end up on a wait list.

To the uninitated, the Belka DX is an incredibly tiny shortwave radio fitting in the smallest pockets, and that size is very much deceiving about the fact that this is a full-blown SDR allmode communications receiver that gives a lot of big tabletop receivers a quite mind-blowing run for their money. 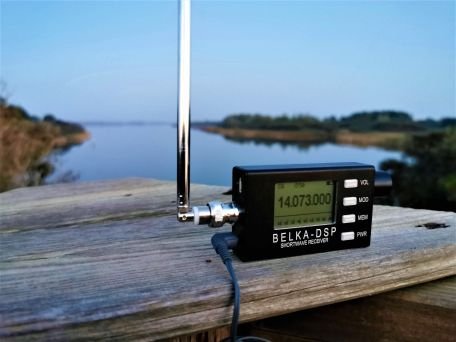 
If you're interested in the details, here's a review I wrote about the predecessor "Belka DSP" a few years ago. The new 'DX' version does everything the old one did, with a slightly expanded coverage between 1.5 and 31 MHz and an IQ output to use a computer with a simple SDR software as a panadapter. The most important points of this radio are that it delivers high quality signal processing like any high-quality shortwave receiver/ham transceiver, and that it does that with an incredible sensitivity on its short whip - so far it has beaten the most sensitive other portables in pretty much any possible metric in my tests. At the same time, its frontend is so robust that it happily digests signals from pretty big antennas, but even without this stunning property I'd be stressing on how different this little radio is from other portables. Needless to say that it has a multitude of filter bandwidths, AM sync detection, of course SSB, FM (!) and even a real CW mode with a proper 300Hz CW filter and - here comes the most mind-boggling fact about the little "Squirrel": It can be had far below $200 incl. shipping and taxes from Minsk, Belarus where it is made.

Since the Belka continues to amaze me on every occasion I use it (it even gave the IC-705 a pretty hard run for its 10x higher price) I thought our new forum would be a great place to have an appreciation thread for that wonderful little radio. What are your experiences with it? When are you using it and for what are you using it? What stunning things did you catch with it?
Top

Well, let me start by writing that the belka deserves appreciation, then, this same thread may also be useful to post comparisons between the belka and other receivers and discussions related to external antennas which fit well or poorly with that little wonder

As someone who appreciates the Belka-DX, I also appreciate this thread! I discovered the receiver through 13dka's brilliant review. At last, a shortwave radio that did everything I wanted and nothing I didn't in a remarkably pocket(book)-friendly package.

Speaking of the review, when I recently re-read it, this excellent tip popped out at me and has made some recent listening sessions all the more pleasant:

13dka https://swling.com/blog/2020/09/state-of-the-art-spy-radio-a-comprehensive-review-of-the-belka-dsp-portable-shortwave-receiver/ wrote:...it has a fully adjustable “sensitivity” control, a.k.a. “RF gain”. It’s useful even when using the whip only, because turning it down is effectively putting the radio in “manual” gain control mode and listening to a couple of strong stations with the noise turned way down and without the AGC pulling the schmutz back up is so much more relaxing.

Most of my listening is with the attached whip, but I have played around with about 32 feet of wire in a few configurations. In a third-floor apartment, it's hit and miss whether the random wire outperforms the whip (which is something I've never before experienced with a portable receiver!); I still need to experiment with a counterpoise. As a loop (without a balun), the wire is lackluster, but winding the wire loosely (spread out) around a broomstick is interesting because it seems less sensitive to noise than the random wire or the whip.

So far, the main takeaway has been that the whip is remarkably effective. This is great for someone like me with very limited antenna space, but I'm also curious about other antenna setups people are using with their Belkas.
Top

Andrew (grayhat) wrote: ↑Sun Jun 19, 2022 9:44 pm Well, let me start by writing that the belka deserves appreciation, then, this same thread may also be useful to post comparisons between the belka and other receivers and discussions related to external antennas which fit well or poorly with that little wonder

Also comparing Belka DSP and DX maybe?
If anyone is interested, I can also open both and take some side-by-side pics.

In general, I am very happy with Belka. I did many comparisons between Belka and other portable radios (Tecsun PL660 and Sony ICF-SW100 to name two) and I should even have the recordings on my recorder. Belka proved to be better than them on almost any occasion (when using the default telescopic antennas on the receivers)
Top

I am a fan of the Belka, and would very much like to have one... however... given the state of the world where the Belka comes from, at this moment it is very unlikely that I can get my hands on one.

The question remains, if Belka never comes back, what is the heir apparent? Are there any small receivers that can be compared to the venerable Belka DX?
Top

Guero wrote: ↑Tue Jun 21, 2022 3:18 pm I am a fan of the Belka, and would very much like to have one... however... given the state of the world where the Belka comes from, at this moment it is very unlikely that I can get my hands on one.

Andrew (grayhat) wrote: ↑Sun Jun 19, 2022 9:44 pm Well, let me start by writing that the belka deserves appreciation, then, this same thread may also be useful to post comparisons between the belka and other receivers and discussions related to external antennas which fit well or poorly with that little wonder

NEI3ZKI wrote: ↑Mon Jun 20, 2022 10:08 am Speaking of the review, when I recently re-read it, this excellent tip popped out at me and has made some recent listening sessions all the more pleasant:

I'm not quite sure if that's really different from just turning down the gain but a while ago I discovered a variation of that tip: I was trying to listen to some German stations ragchewing on 80m but there was a lot of QRM from other EU countries being louder than them so that wasn't exactly a pleasure to listen. Since I was close to my home I started pushing the whip segments together and voila, the EU stations seemed to lose a lot more signal than the closer German stations.

When I had both for a short time (before sending the DSP off to a friend) I was actually thinking about writing about it so I drove to the dike to record them both side-by-side. I abandoned the idea when I realized that they perform so much the same that this would be a boring post.

There was a tiny sensitivity/SNR advantage on 17m for the DX but that was hardly noticeable in the recordings and only with headphones, the only real performance difference is on 160m I guess.
Top

Guero wrote: ↑Tue Jun 21, 2022 3:18 pm given the state of the world where the Belka comes from, at this moment it is very unlikely that I can get my hands on one.

Alex'' shop )https://www.belrig.by is still there, Belkas are in stock and I think the (US and EU) sanctions against Belarus are not affecting this kind of private business at all. If need be, for an admittedly juicy markup, a version of the Belka (with special speaker and full battery capacity) can be obtained from Boris in Bulgaria (www.mobimax.bg).
Top

Here's what gave me the urge to create this thread:

I usually have the Belka (now the DX model) in the breast pocket when I do walks and when I'm listening to hams in SSB, I'm often shocked how much true DX (IOW stations from another continent) I can hear, often stations from the East Coast ragchewing "barefoot" (100W). Or some guy in the US having a chat with a station in the Carribean on 40m, after a while the Europeans notice and start calling in, a pile-up develops and I still hear then (as in "copy" them) all, so I really forget that I'm walking around with a short whip sticking out of my pocket. All my SWLing life I struggled to hear Japanese stations for some reason and it's still a challenge but I had Kazuo-san (JH3NGD) really booming in, charmingly trying to address everyone in their mother tongue, while I was strolling through the fields in the sunset last year. In all these cases the radio doesn't give away that it's a portable, not only because the sensitivity is so high but because it has the same sound, the same filter quality, the same quietness as a big one. Crazy good.

The other thing I often do with it is using some kind of suction cup dashcam mount to stick it to the side window of my car, with the whip sticking out on top of the slightly opened window when I just want to check the bands for an hour or two at the dike without putting up an antenna and all. When the conditions are just a little bit elevated, this does not leave much to desire. Last Sunday, I did that again and checked the IBP beacons, then the WWV frequencies and I came to the conclusion that the condx are not brilliant and likely still under the influence of the recent CME. On 15MHz I could only faintly hear the characteristic WWV 100/600 Hz tones but then I heard just as faintly the female voice time announcement from Hawaii (with WWV in Boulder missing). For the time of day, in the middle of summer pretty unusual in my neck of the woods, more so on a whip.

Then I switched to the 8828 kHz VOLMET frequency and in the tremendous snap, crackle and pop of thunderstorms down south I could clearly hear the monotonous murmur from "ZKAK", the Auckland VOLMET in New Zealand. I'm usually thrilled when I can pick up that station on the "big" (-ish) antennas I put up at the dike, but this was just the puny little whip making this always borderline weak signal from the exact (almost) antipodal spot on the globe audible. Sure, the location helps with that but still, this is the kind of "hardcore DX" I associate with big radios and proper antennas I could only dream of when I saw stations like this logged on the log pages of some shortwave magazines many decades ago.

From what I've read about the motivation behind the design, you're using it exactly as intended -- like a base-station-quality portable. I really need to take mine out more; it's so much fun using a high-performance receiver in an electrically quiet spot. And in places that are free of QRM but not of other people, it's great that the whip is equally discreet and effective.
Top
Post Reply
19 posts